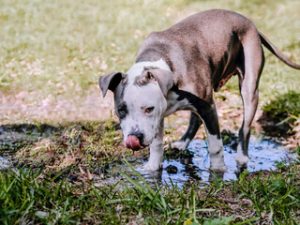 Friendly Reminder: spring is Giardia season! It’s important to try and prevent dogs from drinking from puddles and slow moving water. Giardia and other diseases that can be transmitted through contact with animal feces are prevalent this time of year (snow and ice is melting, releasing accumulated deposits, and the rain rinses fecal matter down into streams and puddles). We’ve really noticed swampy spots at local dog parks like Fern Hill (lots of dog poop is being washed down the hills into the gullies!) and we see dogs playing in these little “ponds”. We also have a handful of customers who have recently reported their dogs have tested positive for Giardia.

Giardia is tricky to eliminate and is unfortunately also tricky to test for. Symptoms can take several months or more to begin because they are caused by gradual changes in the lining of the intestine. It’s possible to get a negative test result if the sample didn’t contain a spore, so multiple stool samples may need to be collected and tested. Symptoms can persist for some time after treatment, as the lining of the gut may need repair. Here are two tips:

Tip #1:
MSM (sulfur) is a fantastic supplement for so many reasons, one of which is that it has been proven to possess antimicrobial effects against Giardia, and appears to bind with receptor sites, blocking the interaction of parasite and host. Most people know MSM as an ingredient found in many joint supplements, as it’s fantastic for inflammation and joint issues as well. Additionally, MSM has so many other benefits for all humans and pets, as we mammals are all designed to need sulfur. It has been shown to help lots of general aches and pains in humans, from headaches to fibromyalgia – it does this by reducing the inflammatory processes and acting as a muscle relaxant. It’s a powerful antioxidant. It alleviates the symptoms of a large number of allergies, including food allergies, contact allergies, inhalation allergies, and others. MSM improves the permeability of cell membranes, and is considered a potentiator of most vitamins and other nutrients, such as vitamin C, Coenzyme Q10, all B- vitamins, vitamin A, D en E, amino acids, selenium, calcium, magnesium and many others. MSM improves the cellular uptake of these nutrients, meaning the body can better utilize the nutrients, and so taking dietary supplements becomes more efficient.
We have several great whole food “joint” supplements that contain MSM that would be very safe and useful for all cats and dogs (as they contain other great things like fatty acids, and other nutrient rich ingredients meant to support overall health. No harm in supplying things like glucosamine to any pet even if they are not yet displaying symptoms of stiffness) – come and talk to us about them!

If you wanted to supplement with straight MSM you could – The therapeutic dosage for dogs is about 50 to 100 mg MSM per 10 pounds of body weight. Toxicity is not usually an issue with MSM; in fact, it’s similar in toxicity to water. The lethal dose for humans is more than three pounds. Here’s a neat discussion of the benefits of MSM 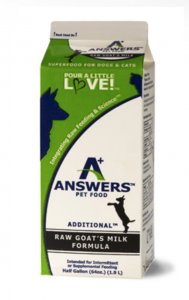 Tip #2: Giardia medications can do a number on your dog’s gut flora. Using a restorative product like Answer’s cultured goat milk for several weeks after using these medications can help to restock the good probiotics and other nutrients that help to restore and repair the delicate lining of the intestines- 80% of the immune system is located here, and supporting the immune system is very important when the body is faced with a parasitic organism that’s hard to get rid of. (Bonus! The goat’s milk is a natural source of MSM as well). Primal Brand also has a fermented goat’s milk . If you can’t find a cultured/fermented goat’s milk (meaning raw with probiotics added), Bone Broth is another fantastic way to repair and support the gut lining. You could then just add a commercial probiotic like Protect with multiple strains (and in the billions) to your dog’s diet, along with some of the bone broth.

Colostrum can be a powerful tool to help repair the gut lining and bolster an immune response to giardia. Read about it here