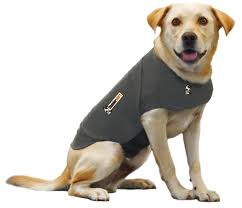 I was busy writing a blog posting on July 4th tips, but I felt like the section I was writing about Thundershirts deserves its own post, as we’ve been so very happy with the results we’ve seen with this product. Though they don’t help every dog, the number of great stories we hear from customers about how well they work on dogs with anxiety issues is very impressive. It’s a sort of jacket that is wrapped snugly around a pet and secures with velcro, and it has amazing calming effects on many anxious animals. How does it work? This is what the Thundershirt website says, “ThunderShirt uses gentle hugging to calm your dog or cat. With its patented design, ThunderShirt’s gentle, constant pressure has a dramatic calming effect for most dogs and cats if they are anxious, fearful or overexcited. Based on surveys completed by over two thousand customers, over 80% of dogs and cats show significant improvement in symptoms when using ThunderShirt. Experts believe that pressure has a calming effect on the nervous system, possibly by releasing a calming hormone like endorphins. Using pressure to relieve anxiety in people and animals has been a common practice for years”. For example, many people are familiar with the idea of swaddling a baby to make them calmer. Temple Grandin, a remarkable woman with autism, discovered that creating and using a device that actually squeezes her helps her and other hypersensitive people to feel calmer. Check out these links: The Hug Machine and Temple Grandin’s explanation of the machine. T-touch practitioners have long touted the positive effects of “wraps” to calm dogs, and doggie daycare facilities often even use a tight t-shirt to help to calm down an over stimulated dog. This even works for cats! Recently two of my employees (Becky and Melissa) tried it on dogs with issues, and their stories are well worth sharing. Melissa’s story is especially touching, as the dog in question has a fairly serious anxiety issue.

Becky Says: “My dog Greta is normally nervous, pacing, barking and neurotically licking us in our apartment, especially when she hears dogs, people or loud sounds. As soon as I placed the Thundershirt on her she calmed down, or “zenned out”. We noticed she was able to sleep and relax through all the distractions with the Thundershirt wrapped around her. Also we noticed a giant difference when we pulled out the dreaded vacuum. She normally runs and hides from the vacuum, but with the Thundershirt on she watched me vacuum, and even followed me once I started tossing her treats.”

Melissa says: “Rusty has separation anxiety from his owner. He also has a rather extreme separation anxiety from the outdoors. This means that when I pet sit for him, he only wants to be outside the entire time. His owner has worked with trainers, and getting him lots of exercise doesn’t seem to help. By evening time he is outside hiding because he doesn’t want to be brought back in. He cries and makes me pick him up or drag him. He won’t put his feet down to walk.

Once inside he starts pacing and panting, crying, whining, tail between legs, shaking, panicking. He will not take his favorite treats or bully sticks, Kongs, etc. and he tries to open the windows to jump outside. He throws himself at the window, crying and shaking, and he gets really hot from all the stress and pacing.

I was using a calming treat, but it seemed to be making it worse (every once in a while some people and pets become anxious when taking the herb Valerian instead of feeling relaxed which is probably what was happening with Rusty). He does calm down when he’s being brushed but as soon as you stop he is back at it again.

The other night we tried a new strategy. I gave him the Dale Edgar Calming treat, half a treat for the first time. Later, after I got him inside I put the Thundershirt on him. He stood still at first and acted like he couldn’t move, which is somewhat good since then he wasn’t pacing. He was still panting a bit but no pacing or crying and no throwing himself against the window. He went to sleep. After a few hours I worried he was too hot so I tried to take the Thundershirt off without disturbing him. Of course he woke up. After a few minutes he did come into the bedroom and started to head towards the window and whine a bit. I got out of bed and put the Thundershirt right back on him and he just turned around and went out into the living room and slept all night.

The next night I left it on him the entire evening and he was relaxed and wasn’t pacing. He had eaten a whole Dale Edgar Calming treat earlier in the evening too. He didn’t throw himself against the window or pace/pant all evening. He slept all night.”

Thundershirt guarantees their products, so there is certainly no harm in trying them. They are widely available from many pet supply stores (including Green Dog of course), as well as on the Thundershirt website.

I’d like to point out that results would undoubtedly be better if you were to pair the calming effects of the Thundershirt with positive counter-conditioning, which is training that uses the pairing positive things like high value treats with the presence of whatever causes the anxiety, like Becky has begun to do with the vacuum. The Thundershirt helped her to create the situation where she can then start work on making Greta think that vacuuming is a nifty opportunity for her to get goodies, thereby making her feel excited when she hears the vacuum instead of anxious (changing her emotional response through classical conditioning).

The other tip I might offer is that it’s a good idea to sometimes put it on when there isn’t anything bad about to happen, as dogs are great at picking up patterns. If you ONLY ever put it on when you were on the way out the door to go to the vet, for example, they might get wise to that and start to feel a bit anxious.