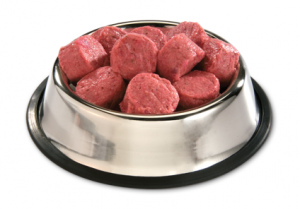 The FDA and the AVMA seem to have mounted a significant campaign against raw foods for pets, and we’d like to speak to that, as sometimes their information seems strangely skewed.

Last August (2012), the AVMA issued a statement warning against the safety of feeding raw food due to the risk of salmonella. The biggest problem we have with this is that this implies that there are no risks of salmonella exposure with other pet foods like kibbles. In fact a remarkable number of kibbles, chews and treats for dogs have been recalled for salmonella contamination.

Most concern about salmonella contamination is for the health of the humans involved, as humans are more susceptible to illness from handling salmonella contaminated food than the pets who eat them. What is never acknowledged is that to date, the Centers for Disease Control and Prevention have no confirmed cases of human illness linked to raw pet foods. In stark contrast to this, the same year that the AVMA issued this warning, one of the largest salmonella recalls for kibble occurred in Gaston SC at the Diamond Manufacturing facility, shutting down the production of at least 15 brands of pet food, and resulting in 49 confirmed human cases of Salmonella Infantis linked to kibble pet food manufactured at Diamond’s facility. At least 10 of these people were hospitalized, though reporting is poor for this, so it may have been more.

The Centers for Disease Control and Prevention reported in the journal Pediatrics that an outbreak of salmonella in 79 people between 2006 and 2008 was caused by contaminated dry pet food. The infections, half of which struck children, were the first known human salmonella cases linked to dry dog and cat food (from Mars Pet Care)

Here is a list of just some of the salmonella recalls in the past 5 years. Dry pet food (kibble), raw pet food, and treats included (this article is continued below this list):

September 12, 2008, Mars Petcare dry pet food all varieties made – Salmonella Schwarzengrund. (note: Pet food products from the same plant were previously recalled on August 25, 2007 for the same salmonella problem, 79 human illnesses reported (see above), and the facility was subsequently closed)

3/14/13 – Bravo! Raw Food Diet 2 lb. Chicken Blend for Dogs and Cats – Salmonella (3 other SKUs were voluntarily recalled in April that tested negative for salmonella by a 3rd party, but were produced on the same machinery as the above recalled food)

On 11/6/13, The FDA posted a “study” on their website. They said:
“In a recent two-year study, the FDA Center for Veterinary Medicine (CVM) screened over 1,000 samples of pet food for bacteria that can cause foodborne illnesses. (The illnesses are called “foodborne” because the bacteria are carried, or “borne,” in or on contaminated food.) The study showed that, compared to other types of pet food tested, raw pet food was more likely to be contaminated with disease-causing bacteria. Raw pet food was not included in the first year of the study. In the second year spanning from October 2011 through July 2012, CVM expanded the study to include 196 samples of commercially available raw dog and cat food.”

These are the main problems we have with this:

1) The FDA claims to have a zero tolerance for salmonella in pet food, and says they were studying the incidences of salmonella and listeria in pet foods during the period between Oct 2011 and July 2012. However, I just looked carefully through the “2012 Recalls, Market Withdrawals & Safety Alerts”on the FDA website for that time period, and though I found eight warnings about dry pet foods and treats containing Salmonella, there were no warnings issued for the 15 raw pet foods that they claim tested positive for salmonella or the 32 they say tested positive for Listeria. Why wouldn’t they have issued warnings for these? Why wouldn’t they have come up in our radar any other way either? (We vigilantly monitor websites that issue warnings of pet food recalls, both voluntary and those issued by the FDA, and keep records of all incidents we find). They claim that zero dry dog foods tested were positive, zero jerky treats, and only one dry cat food, but these samples clearly didn’t include (and the report does not mention or take into account) the many treats and dry foods that did test positive or were voluntarily recalled due to salmonella risk during that time period. Remember, this was the same time period that every single bag of at least 15 brands of dry pet food was recalled for Salmonella, and 49 people reported illness that was confirmed by the CDC as being associated with this recall. Moreover, during the period of time that FDA did this study,  I can find zero reports of any raw pet food linked with salmonella or listeria contamination. This is not an accurate representation of risk in pet foods, in our opinion.
For irony, please note that their report came out on Nov 6, 2013. So did this warning on the FDA website: 11/6/13 – Bailey’s Choice dog treats – 7 lot numbers of Chicken Jerky Treats – positive for Salmonella.

2) Dry pet foods and treats have also been implicated in multiple disastrous events in pet food history, the likes of which have never been seen in commercial raw foods. Here are the top two in the past 8 years:

– on December 20, 2005 — Diamond Pet Food discovered aflatoxin in a product manufactured at their facility in Gaston, South Carolina. Aflatoxin is a naturally occurring toxic chemical by-product from the growth of the fungus Aspergillus flavus, on corn and other crops. This resulted in a massive nationwide recall of all corn containing products made in this facility, huge numbers of sick pets, and at least 100 dogs died from aflatoxin poisoning.

2007 – Melamine found in Wheat Gluten and other ingredients from China – More than 5,300 pet food products recalled. By the end of March, veterinary organizations reported more than 100 pet deaths amongst nearly 500 cases of kidney failure, with one online database self-reporting as many as 3,600 deaths as of 11 April. The U.S. Food and Drug Administration received reports of several thousand cats and dogs who had died after eating contaminated food, but have only confirmed 14 cases, in part because there is no centralized government database of animal sickness or death in the United States, as there are with humans (such as the Centers for Disease Control) As a result, many sources speculate the actual number of affected pets may never be known, and experts are concerned that the actual death toll could potentially have reached into the thousands.

– Chinese chicken jerky has caused 600 deaths and 3600 illnesses (many more unreported) so far, without a recall.

1) Why do the FDA and the AVMA not feel like these dangers are worth reporting with the same urgency as the very few raw food recalls that have had very minimal, if any, negative effects on animals or people?

2) Why are the pets fed raw foods banned by organizations like the Delta Society from doing therapy work, and those fed processed foods and treats are not, even though they are as likely or more likely (in our opinion based on these recall numbers) to be exposed to salmonella? They are not even removed from service during active salmonella recalls of foods that they are currently eating! Dogs that love to ingest feces are common enough, though therapy dogs that engage in coprophagea are not, to my knowledge, banned from therapy work.

3) Why do vets have such a visceral negative reaction to commercial raw foods, but never for other commercial pet foods (dry and canned) that have had such dramatic and well documented safety problems? Do they just not know?

4) There have been multiple global reports with very high numbers of spinach and other vegetable and prepared salad recalls for e.coli, listeria, cryptosporidium, and salmonella, but the FDA and the AMA do not seem to issue specific frightening warnings to people that the best way to avoid these bacteria are to simply not eat fresh vegetables or salads! See this PDF where I’ve listed some major problems in this area, as well as the warnings for the last 30 days on the FDA website : Spinach and salad warnings

– The kinds of raw foods we carry are produced with the utmost care and safety standards. All companies have very tight quality control programs, including independent testing for pathogens, strict processing safety protocols, independent 3rd party inspections of facilities, and very picky sourcing standards. As Rad Cat brand says, “the control of bacteria begins at the farm. We will only work with vendors that we feel comfortable about their quality standards. Products that come from sources that provide free-range meats or have organic certification are typically an assurance of overall higher quality and higher standards, which includes testing and methods to assure safe handling, packing, and shipping.” Some frozen foods are treated with a process known as High Pressure Pasteurization, or HPP, which uses high pressure to eliminate pathogenic bacteria. One brand, Stella and Chewy’s, even has date coding on the side of each bag that consumers or vets can use on the S&C website that shows the test results for pathogenic bacteria for that specific bag of food.  Dehydrated foods like Honest Kitchen, though not technically raw, are minimally processed and heated to the kill temperature for pathogens. Deep freezing and then freeze-drying raw foods removes the moisture from the equation preventing bacterial growth during storage. Many frozen, dehydrated and freeze-dried raw foods manufacturers utilize a voluntary FDA (Food & Drug Administration) Food Safety protocol called HACCP (Hazard Analysis and Critical Control Points). This is a voluntary preventative sanitary protocol for food manufacturing that eliminates many, if not all, of the food safety issues that we have been of late experiencing with both human and pet food safety. If only all pet foods and human foods would have the same levels of safety in manufacturing as our raw foods have!

– Anyone that knows anything about nutrition knows that whole foods are healthier for the body, and more supportive for both avoiding and healing chronic illness than heavily processed foods. Every week we hear about and witness amazing changes in our customers’ pets who switch to minimally processed (frozen/freeze dried) commercially produced raw foods. Just this week, a customer whose dog has had years of frequent seizures told us her dog hasn’t had a seizure in 5 months since switching to raw food. These kind of reports are common, though many people feel like they have to hide the reason for these changes from their own vets.

How can animal health care providers continue to demonize raw foods and excuse all others from this discussion of safety?

Here is a 3-part series of articles written by Dr. Karen Becker, DVM. on the benefits and myths surrounding the feeding of raw foods. We encourage you to read them:

Part One: The Feeding Mistake Linked to the Cause of Most Disease – Are You Making It?

Part Two: The Biggest Myths About Raw Food (And Why They’re Mostly Nonsense)

Part Three: Common Feeding Mistakes That Can Harm Your Pet