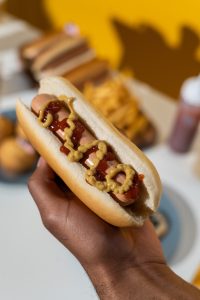 Did you know that a recent study found that children eating more than 12 hot dogs per month have nine times the normal risk of developing childhood leukemia??

Here’s a two part posting about the topic of nitrates in food. First, I was frustrated the other day when a customer I’ve never seen before came in looking for the Natural Balance Rolls of soft food/treat that people often use for training and Kong stuffing. I told him that we didn’t have that particular brand, as that one is preserved with Nitrates. He said “I’m a vet, and I’ve never heard of anything bad about nitrates”. As I told him about how it was a suspected carcinogen, he cut me off with “do you have sources you can site?” Well I did, but I had a store full of customers and he was in a huge rush. He left without those sources, and without leaving me his e-mail so I could send them later, and I’m sure he left thinking I was an overreacting silly person. However, I feel like if an ingredient is strongly suspected to be carcinogenic, and there are any studies showing evidence to that effect, then I would hope that A) vets might have heard of this before, and B) wouldn’t it be wise to avoid ingredients like these altogether, just in case? I know a lot of things can be carcinogenic, and some of them are out of our control. But food and treat ingredients can be controlled, and there are certainly lots of great alternatives.

There wasn’t time to change his opinion, but it made me think I should address it here on the blog. It also made me think of the fact that I never did write directly to Merrick Pet Foods about the use of nitrates in the treats that we wish we could sell except for the Nitrates (their sausage treats that correspond to the flavors of their great canned food line.) I was pretty disappointed with their response.Here’s my letter:

“Hello – we’ve told our reps before, but I’m not sure I’ve actually written directly to you about this. I’d just like to say how sad we were to find out that those sausages that you make that correspond with the can flavors are made with nitrates added. We were so excited to learn about them before they came out, and had placed a big ISO, but when we got the ingredient list, we cancelled it. We won’t stock anything in our store that has nitrates, as they combine with amines in meat during the cooking process to form carcinogenic compounds that have been associated with multiple forms of cancers in humans. I got stricter about them when recent studies showed the strong link between hotdogs with nitrates and leukemia in children.
This is from the cancer prevention coalition:
“Peters et al. studied the relationship between the intake of certain foods and the risk of leukemia in children from birth to age 10 in Los Angeles County between 1980 and 1987. The study found that children eating more than 12 hot dogs per month have nine times the normal risk of developing childhood leukemia. A strong risk for childhood leukemia also existed for those children whose fathers’ intake of hot dogs was 12 or more per month.
Researchers Sarusua and Savitz studied childhood cancer cases in Denver and found that children born to mothers who consumed hot dogs one or more times per week during pregnancy has approximately double the risk of developing brain tumors. Children who ate hot dogs one or more times per week were also at higher risk of brain cancer.

Bunin et al, also found that maternal consumption of hot dogs during pregnancy was associated with an excess risk of childhood brain tumors.”

I really can’t bring these products into my store when I even have the smallest doubt about the safety of nitrate consumption. I know these products are going to be delicious, and that dogs will eat a lot of them! I hope that in the future you’ll consider reformulating these sausages to be naturally preserved, or shrink-wrapped in a way that
would not necessitate nitrate usage for preservation.

Thank you for your other great products”

This was the response that made me think that they didn’t even read my letter closely:

Thanks for taking the time to e-mail us and let us know about your concerns. Small amounts of the Sodium Nitrate are intentionally added to Sausages to prevent botulism.  It is in bacon and just about every sliced lunch meat out there along with hot dogs, bologna, etc for this very same reason. This is the only one of our products that contains Sodium Nitrate, and is required for this reason.

I am very sorry for and inconvenience this may have caused.
Merrick Pet Care”

If you like those sausages but are concerned about nitrates, go to http://www.merrickpetcare.com/ and let them know.

If you like hotdogs and bacon but you don’t want to eat nitrates, , check out the delicious turkey hotdogs (and pork bacon) from Applegate Farms.

One Response to “Nitrates in Food Should be Avoided”