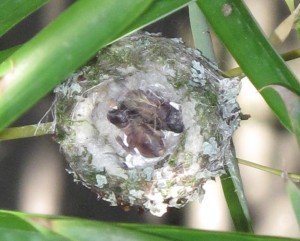 The babies hatched March 5th and 6th, respectively, and are about the size of honey bees. The top one is the older one – slightly bigger already and has fuzz, the newer one below is more naked looking. You can see the remnants of eggshells under them (it’s funny – last year she chucked them out of the nest right away – see the photo of the size of the eggshells here).
In this photo you can really see the spider webs she used to strap the nest onto the bamboo.

One other little observation that seems interesting to me, (and maybe not to anyone else, as it’s a certified bird nerd moment here) is how different her posture is in the nest after they hatched. While she was incubating, she was just sitting, presumably just thinking little birdy thoughts, passing time. As soon as one hatched she became so alert, her eyes constantly searching the bamboo for insects. Her bill points up, her neck is all stretched up, her head moving around a lot. It’s a tough job to feed these little guys – they grow so amazingly quickly and eat so often. Best to be on the alert for an easy meal. I just knew from looking at her that the first chick had hatched – she looked so different.

I promise to try and get a better photo of her feeding them – they’re always hard as the light changes so much out there and she’s right over them, but here’s the first try: 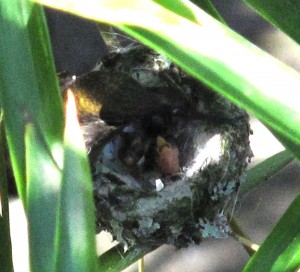 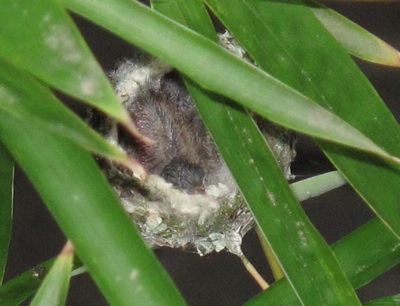 Update:
March 13th, about 8 days old. Really starting to fill up the nest. The one on the left is head towards us, and the other one, a little obscured by leaves has his head pointed the other way. They’re fluffier now and mom is just about done sitting on them – she just constantly is gathering food and feeding them. 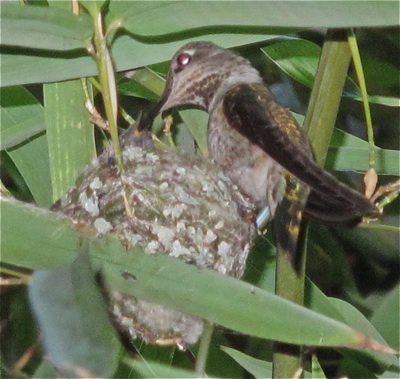 The nest is really getting crowded: 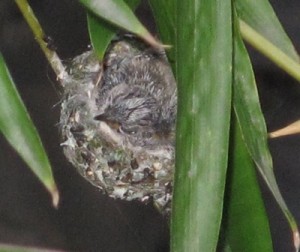 They’re so big that you can see their little bills sticking out over the edge from below: 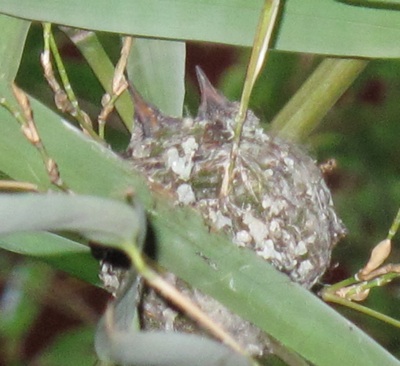 March 27th: We really don’t fit in this nest anymore: 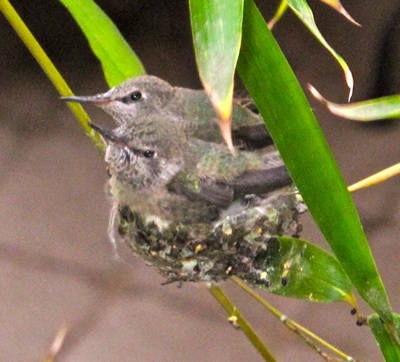 They’re really ready to go any minute. They’re very restless, squirming and shoving, stretching up, really interested in looking all around, and one of them was doing some wing exercising – standing up on the edge of the nest and flapping (which looks like a blur already). I thought for sure that one would hop out by the end of the day, but at 6 p.m. they were both still in there. Next day for sure for one of them, and probably the day after for the second. They’ll stick around for a week or two in the bamboo getting fed by momma. One frustration – last year I learned that mom builds her next nest during the last few weeks of the babies growing in their nest, and lays her first egg in the new nest the day after they both fledge. However, I can’t seem to find where that next nest is, and I’m worried it’s not in the courtyard at all. I’ll keep looking. 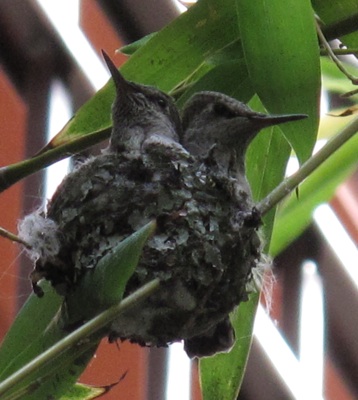 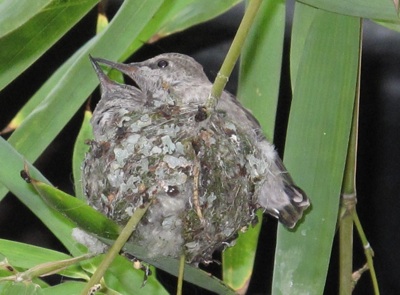 They hopped out of their nest and into the bamboo on the 29th and 30th of March, and she continued to feed them until about the 7th or 8th of April. Still don’t know where her current nest is, but a lucky customer of ours told us there’s a female with eggs right outside their window, in their bamboo! They only live a street or two away, so maybe it’s her. Here’s a photo of one of the babies, a few days after it left the nest. 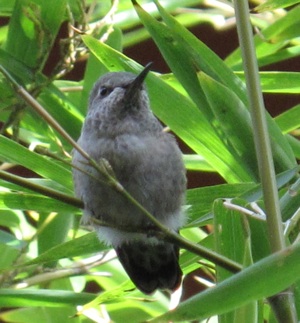