Yesterday was a busy one for mom, as there was a squirrel in the bamboo, and the fool thing seemed stuck up there. It clearly was physically OK and could have left if it wanted to, but it seemed paralyzed with some sort of deep-seated anxiety. He stayed stock still wherever he was, but mom hummer was flipping out. She had one baby in the nest and one was in the branches above, and she was quite upset that there was anyone else in her bamboo nursery. Poor thing – she expended so much energy yelling at that squirrel and swooping angrily around trying to chase it off, but he was like a statue. We shook some branches several times during the day and each time the squirrel would jump to another branch and stick there for a while. As if she didn’t have enough to do with feeding herself, feeding the babies, and building her new nest – now she’s got to fuss with that squirrel. By late afternoon she had started to relax and seemed to give up eventually, but I think the squirrel waited until the cover of darkness to leave the bamboo. 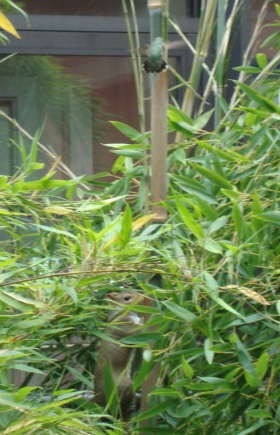 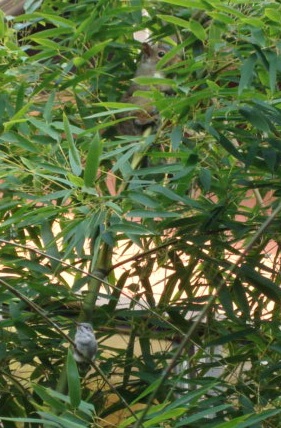 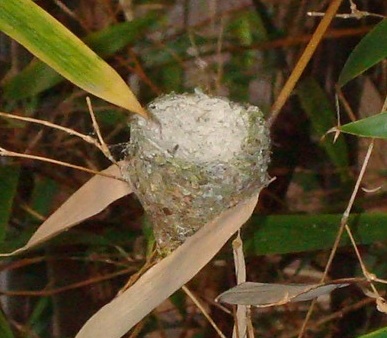 I came in this morning and saw mom on the new nest. Sure enough, there’s an egg in there already! Wow – she wasted no time at all.  Now, she’s sitting on the egg, leaving to feed herself and collect food for the kids, and feeding them too. They’re so sweet, just hanging out on the upper branches, occasionally flying a foot or two up in the air and back down again. 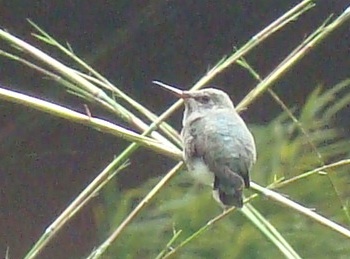