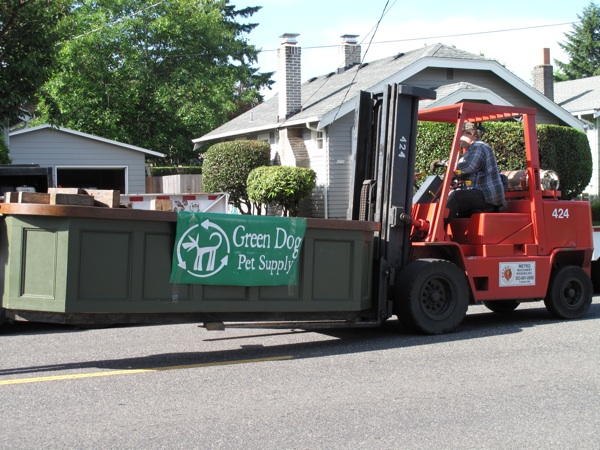 Note: this post was created several years ago – we finished renovations and moved into the new space in July 2010!

That’s our sales counter, on its way to the new location! We were told by the guy who built it that it shouldn’t be moved, as it would likely crack (it’s more than 1000lb and the top is concrete that was poured in place.) Luckily, we found a mover that specializes in moving heavy fragile things (printing presses, etc). So, they used jacks and wheely carts and rolled that thing out to the curb where they picked it up with a forklift, put it on a flatbed, and drove it down to the new place. Again with the forklift, then the wheely carts and jacks, and it was in place! Pretty fun morning actually, and trippy to see our counter outdoors. The day didn’t end there though – the big built-in that was at the end of the store was deconstructed and taken down the street as well to be rebuilt. Luckily our contractor (Alpine Designs) is the same guy who built it in the first place 6 years ago and it went really smoothly – we were even able to reuse a good bit of the drywall, which means less painting for me. Check out lots of fun photos of the renovation and deconstruction, as well as more photos of the counter move on our Facebook page at this link.
Our move is still scheduled to take place on the 4th and 5th of July 2010, and we very much hope to be open the morning of the 6th, if the computer is up and functional. Come check out the store this week to see how different it looks, and score some deals on clearance items!