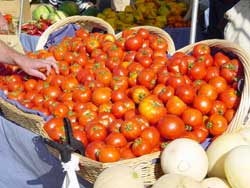 Our local farmer’s markets are in full swing right now, and I couldn’t be more thrilled. Living in Portland has really made us feel so much more connected to our local farmers – maybe because there are so many things grown here. It’s made us much more aware of not only how much more delicious fresh organic foods are than those that have ridden in a truck or boat or train (or all of the above) to get to my supermarket, (moments from wilting), but also what a challenge it is for small, locally owned organic farmers to compete with giant agro-business.

I’m sure most of you know that organic farming is good for both you and the environment, as it reduces overall exposure to toxic chemicals. Synthetic pesticides and other chemicals can end up in the ground, air, water and food supply, and not only are they pollutants but they could be associated health consequences, from asthma to cancer. But did you know that organically grown foods can actually be better for you (and your pets) nutritionally than their traditionally grown counterparts? Just a few of the examples I found:
A study was presented at the Soil Association (UK’s largest soil conservation, organic farming, and environmental protection NGO) Annual Conference that came down solidly on the side of Organic milk. According to the research, cows farmed organically produced milk which was, on average, 50% higher in Vitamin E, 75% higher in beta carotene, two to three times higher in the antioxidants lutein and zeaxanthine, and richer in Omega-3 fatty acids than conventionally produced milk. A group of scientists from Europe have shown that organic food is healthier, for rats. The University of Newcastle Upon Tyne and the Danish Research Center for Organic Farming found that by feeding rats only organic food they had a stronger immune systems, slept better, and stored less fat. In a study by the U.S. Dept of Agriculture, organic ketchup was shown to contain 57% higher levels of the antioxidant lycopene.

So get on out there to the Farmer’s Markets while they’re still in full swing, or seek out markets in your area that carry locally grown produce. When food is locally grown, it hasn’t traveled as far to get here as stuff in the supermarket — this uses far less fossil fuel and produces fewer emissions to transport it. It’s also fresher, so it tastes better and lasts longer. Support our local organic farmers!