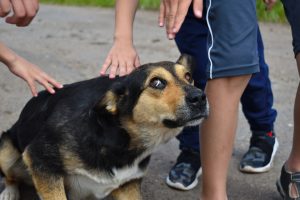 This is one of the very hardest things about my job.

Here’s an interesting article highlighting a survey that illustrates the correlation between using aversive, punishment based “training” is more likely to illicit additional aggressive behaviors:

NOTE: Here’s an even better article than this blog post that I wrote later, with specific suggestions for how to help a frightened reactive dog:
To Treat Or Not To Treat?  (Foundational Thinking For Creating Good Behavior In Dogs Part 2 : Choose Your Methods of Training Carefully, especially with Reactive/Fearful Dogs.

If you’re looking for a trainer, try looking for one who has an affiliation with APDT (Association of Pet Dog Trainers) or the certification “CPDT” after their names (certified pet dog trainer), whose program is based on humane training techniques.

If you’re in Portland, I’ve got a nice long list of good trainers for you. Check out this one: