Otis came to us at 10 years old with quite a bit of plaque on his teeth (pretty normal for a cat that only eats kibble) and during his dental cleaning, the vet noticed that he has a few abnormalities in the design of his mouth that  could cause trouble if not kept clean (pretty normal for a Himalayan). So, I’ve been working on acclimating him to having toothpaste rubbed on his gums with the hope of brushing them someday, etc. Another strategy we’ve employed is that we’ve started giving him chicken neck treats and have found it so interesting to watch him process them, as he chews and chews them on both sides of his mouth. Truthfully, I had recommended them to my customers, but before we had Otis, we have never had a cat that I could give them to – our last was in her 20s before we thought about giving her necks and she wouldn’t have done well with them at that point. I thought it would be interesting to people to see how they process them, so I took this video.  It also seems so stimulating for his mind – it takes him a while to figure out how he’s going to pick them up (I edited out a lot of that at the beginning of the video) and you can see him really thinking and giving it great effort, and he seems so satisfied all night on the nights we’ve been giving them. In fact, we’ve linked it to a game to make it all more exciting for him: There’s a great toy called “Da Bird”, whose feathers spin as they fly through the air, really simulating a bird in flight very realistically. When he makes an especially spectacular catch, he runs with it in his mouth to the kitchen and we give him his 1″ piece of neck, so it’s like he’s hunting, catching, and eating a bird. We adopted Otis because he had proven he could not remain safe outdoors (hit and badly injured by a car once and stolen at least once and luckily recovered). We wanted him to be safe and to protect the wildlife he was hunting during his 10 years as an indoor/outdoor cat, and we knew that turning him into an indoor cat meant that we would have to meet his physical and emotional needs to remain content indoors. As an indoor cat, this activity is very very exciting and satisfying for him, it’s supercharged the game making him exercise more strenuously, and no songbirds were harmed! We started with a piece of neck once a week, and have moved to about 3x a week. We believe that though he will continue to need regular dental cleanings, these yummy meat tooth scrubbers have helped his mouth stay cleaner. To create his treats, I buy half dozen whole chicken necks at a time, remove the skins, rinse them briefly and cut them into 1″ pieces with kitchen shears. I put the whole batch on a tray in the freezer so they freeze individually, and dump them into a freezer bag. On the nights we’re going to give one, we thaw it in a bowl of cool water – it takes very little time. Chicken gizzards also make a great cat chew/treat when cut into smaller pieces, though it takes less time for him to chew them than the necks. 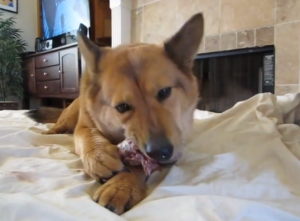 That photo above links to a great video that shows how valuable poultry necks are for cleaning dogs’ teeth. (Photo and video from reelrawdog.com

Feel weird about giving them? We did too a bit at first, but as long as chicken is raw, it can be fed to pets – never ever ever EVER cook poultry bones (or other kind of bone) and give them to pets – cooking makes the bones brittle and very dangerous. Raw poultry necks have smaller more pliable bones and lots of collagen. Our holistic vet thinks raw chicken necks are great! Think of all the hundreds of thousands of feral cats out there eating whole mice and birds – crunch crunch crunch! (Their presence is a real disaster for wildlife as a result – please see this link!)  However, for those that question whether cats can and do eat larger prey, and whether the tiny bones in a chicken neck could be unsafe for a cat to eat, here’s a video of a cat chewing the head off of a fairly large ground squirrel (of course this also illustrates what a risk cats are to wildlife. Not for the squeamish, but the point here is to show what their physical ability is to process meat and bone):

When feeding necks and other bones regularly to your pets, try to source organically fed/grass fed meats and bones to cut down on environmental contaminates. Try and buy them fresh from the best place you can (meat meant for humans to eat in supermarkets likely has a higher bacterial count than one sourced directly from a local farm (as supermarket meats are being sold with the understanding that it’s meant to be cooked), or those from an Independent pet supply store, processed for the purpose of pets eating them raw. This is more of a concern for the safety of the humans handling them than for the pets. If these options aren’t possible, here are some good instructions on disinfecting raw bones if it makes you feel more comfortable.

7 Responses to “Chicken Necks for Cats and Dogs”