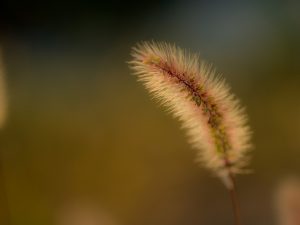 In spring and summer, especially on the West Coast (and most especially in California), be on the lookout for foxtails and be aware of their tremendous potential to seriously harm your pet. Dogs do encounter them in Oregon, and the problem will likely increase as weather patterns are shifting. Foxtails are a kind of grass seed – many grass seeds have a similar look, but not all are as harmful as some. Dogs seem to be particularly at risk for complications from interacting with foxtails. The reason that some species are so dangerous is that they can quickly make their way into your dog’s body through literally any orifice, including the nose, eyes, ears and mouth, and they can also puncture the skin. Between the toes is a very common place for a foxtail to embed itself. The trouble is, the way the foxtail is designed, When it matures the foxtail head breaks apart into individual little barbs that are designed to both catch onto an animal’s coat and hitch a ride to a new location, and then allows it to burrow itself into the soil. If  you touch any grass seed, it will be easy to stroke it from bottom to top, but from top to bottom you’ll feel a rough resistance. It manages to travel, and can only travel forward, not backwards. Once inside your dog’s body, foxtails can move relentlessly forward through the tissue and through the body. They can create abscesses, damage tissue, and cause an infection known as grass awn disease. They can migrate from inside your dog’s nose to its brain. They can dig through skin or be inhaled into — and then perforate — a lung. They can even slip into the crevices of a penis or vulva. They’re serious business.
Things to watch for if your dog has been running through dry grasses:

If your dog is shaking his head or scratching at their ear, there could be a foxtail in their ear canal. You will likely need a veterinarian’s scope to find it.

If they are pawing and rubbing at their eye or squinting there could be a foxtail in their eye. 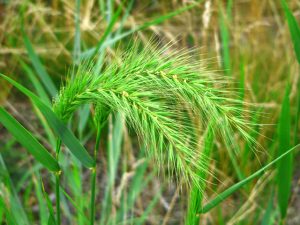 If they are limping, they could have a foxtail embedded between their pads.

If they’re suddenly sneezing uncontrollably, they could have inhaled a foxtail into their nose.

If they’re  licking their genitals persistently, a foxtail might have slipped up into her vagina or lodged in a fold of her vulva. or gotten under his penile sheath.

The worst news is that foxtails, once in the body, are nearly impossible to find with traditional imaging techniques, and infections they cause can occur behind the foxtail, so it may have moved on even if you find the site of infection. Sometimes even multiple surgeries are needed to find and extract it. The lesson here is, if you’ve been out in the field and the dog has been running around in vegetation and displays any unusual symptoms,  get into the vet. Foxtails are a major reason to have health insurance for your dog, as small problems can lead to almost unimaginable levels of complication when they get into internal organs. I can’t bring myself to copy and paste some of the horror stories, as I don’t want to scare you more. Just realize that foxtails are not monsters that jump out from behind bushes and kill in a moment. If you check the paws and coat carefully after a walk in wild grasses you can remove them before they ever wiggle into their flesh. If you’re vigilant to the symptoms of having one in an ear/eye/nose, etc, you can move quickly and get them seen by your vet. Keep the hair on the feet of your long-haired dog short. 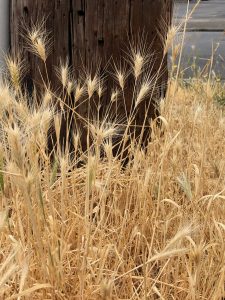 These foxtail style grass seeds are across the street from the store, but I’m unsure if this is one of the more dangerous species.

If you have them in your lawn, pulling them (especially while they’re still green) is the most effective means of control outside of toxic chemicals (also a harm to your dog). Don’t use a weed whacker, as the heads laying on the ground will still dry up and break apart into barbs. One idea might be to plant a close and fast growing lawn grass to choke out the foxtail plants over the years. (in the Portland area, visit our friends at ProTime Lawn Seed for advice)

A vet that runs field trial labs suggested this trick: If they sniff up a foxtail and you can see it, spit down your dogs nose. Sounds gross but it will soften the foxtail barbs and usually cause your dog to sneeze it right out. May you never have to spit into your dog’s nose.

One of our managers has had to deal with foxtails twice, embedded in her Aussie’s foot. She offers these tips for extraction. Note: this is not veterinary advice, but I include it in case of emergency, perhaps in remote areas devoid of vet care (epsom salt might be a clever thing to include in a First Aid kit. Of course the safest thing would be to see your vet.
She says, “So Dundee had his second ever foxtail (grass seed) cut in his foot… same exact thing both times. I noticed him licking on one specific part of the top of his toe, where it was really red and swollen with a small cut/hole barely bigger than a pinprick. I knew what I was dealing with this time so I immediately trimmed the hair back a little and commenced with epsom salt and warm water soaks 3 – 4 times daily. About 1/4 or 1/3 cup epsom salt to about a quart of warm water (just eyeballed it), for 10 minutes each soak. Followed with a good spray soaking with Microcyn. Also gave him a teaspoon of raw honey twice a day for an antibiotic and put him in a cone. Before each soak, I lightly pushed around the cut (towards the opening) to encourage drainage (which was SO GROSS) and help the foxtail move out. Both times, the piece slid out immediately after soaking at the end of the 2nd day. Last time, it healed up very quickly after the piece came out so I’m hoping the same happens this time! Anyway, just wanted to pass on what has worked for us since we’re in the throes of foxtail season and maybe a customer will come asking for advice!”

There is actually a mesh hood for dogs that spend a lot of time in the field to help to protect them.

Hope this helps! Knowledge is power!