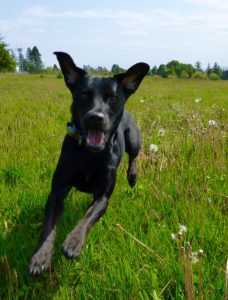 I covered this a few years back, but it seems lots of people are forwarding us the warnings about cocoa mulch, and I thought it was definitely worthy of a blog post.

There is a mulch sold by garden stores that is made from cocoa bean shells. It really does look good, has a lovely fine texture and smells fantastic, just like chocolate. The trouble is, just like chocolate, it contains both caffeine and the chemical that is toxic to dogs called theobromine. Though deaths from eating cocoa mulch are not widely reported, there have been a number of cases of dogs becoming ill from ingesting it. Symptoms include vomiting and diarrhea, hyperactivity, rapid heart rate, muscle seizures, and possibly death. The concentration of theobromine in the mulch is actually quite high, making it more dangerous than something like milk chocolate, and since it does smell so delicious, there is a risk that some dogs might eat it.  So, if you have an indiscriminate eater, try to be vigilant on walks if you see your dog really nosing around a mulched area.  If you really want to use cocoa mulch, look for a variety that states that it is theobromine free (though it still might contain caffeine, which could also be harmful to pets), or just consider some of the old favorites like tree bark.