Thanks dog and cat folks for tuning in to our hummingbird news! 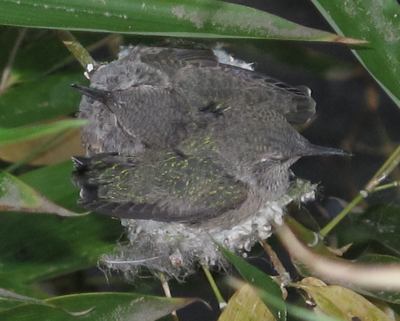 We wrapped up the season with a little drama. On August 1st we had our annual Fremont Fest celebration, which means the courtyard was crowded and noisy – live music seemed to make the babies even more restless than they had already been – one baby was already stretching up a bit, and looking antsy the day before. While the music was pumping, the chicks were really shifting around – I was nervous that they were going to make a break for it and wind up on the pavement. Well, the next day we came in to work and heard the distinct cheeping vocalization that the chicks only seem to make once they have left the nest. That little guy was really cheeping. I finally got a moment to break away and look for the fledgling, but it took me quite a bit of time to find it. One reason is that those contact calls are designed to be hard for predators to locate the source – everywhere you stand it seems to be coming from a different direction. The other reason was that the baby was on the edge of the planter- a foot above the ground, right over a big drain. Mom flew in and was obviously a bit distressed about the situation herself, but I didn’t want to interfere. We put our sandwich board in a spot that would block dogs/kids from coming too close, but then I started thinking about that drain… Pretty soon mom left to gather food, and I took the opportunity to scoop up the baby and run it upstairs, where I deposited it into a balcony planter that’s only a few feet from the nest.Â  I’ve handled wuite a few birds, and even a few hummingbirds in the past (I was a zookeeper and I’ve also been lucky enough to be part of a number of bird banding projects) but it was funny to hold that baby, even for a moment – there was hardly anything to him. Light as air. It stayed in the planter for 20 or so minutes before launching itself towards the bamboo where it pretty much crash landed into the branches and luckily stayed there. Then, an hour later, there it was again but this time right on the ground. So, I scooped it up again (when mom wasn’t looking) and ran it back upstairs. This time he flew into the bamboo and stayed there. Whew!

Then the 2nd baby really wanted out of there too. 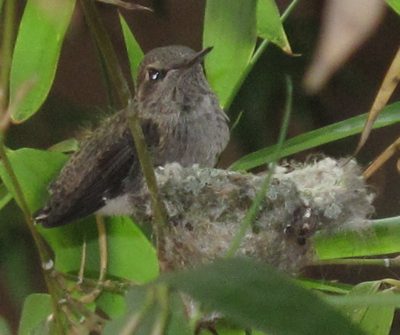 standing on edge of nest 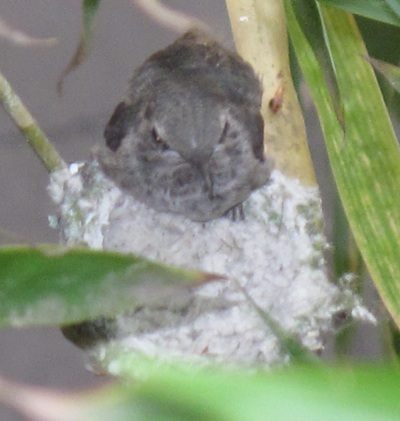 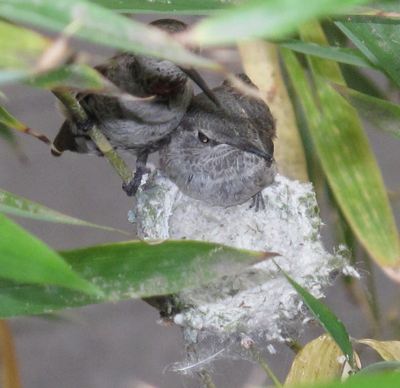 looks bigger than mom due to still having some fluff 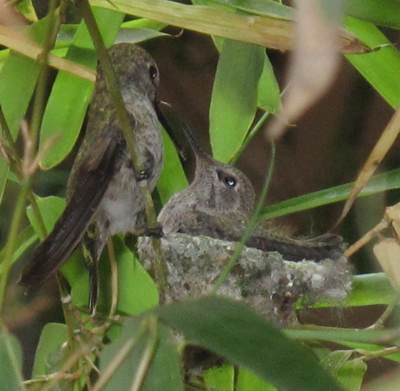 maybe have a little something to eat before I go

By Monday they were both out and doing just fine

Note: my photo won’t publish. Check back in a day or so to see both babies on a branch.