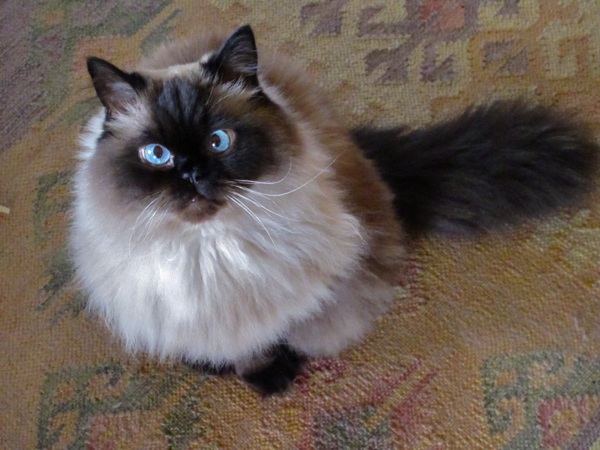 There’s a lot of cat stuff on our minds these days as we’ve recently adopted a 10 year old Himalayan cat.
So many people think that cats don’t need anything – we hear this all the time. They seem to understand that dogs need interaction, exercise and mental stimulation, but cats, (especially indoor cats) need these things as well. One thing we hear a lot from the people who think their cats don’t need anything is how horrible their cats’ behavior is and how destructive these cats are to their home!
We needed to teach Otis a lot of new things when we brought him in, as we were turning him from an indoor/outdoor cat to an entirely indoor cat, so making sure he was good at a litter box and scratching posts and keeping him stimulated enough to make up for his outdoor time was all important. I thought it might be fun to share a few videos with you.
Cats can certainly be trained through positive reinforcement techniques to follow commands. He’s got a pretty good recall and he sits like a champ on command. I also needed him to get the heck out from under my feet in the kitchen – I decided to use the threshold of the kitchen as a visual marker; something easy for him to understand. Get over the threshold and stay there and the treats you seek will come to you:

It’s been working well. First I lured him with a treat into the spot, while I said the command, then I started saying “get in your spot” and then luring and rewarding him, and then I would say the command and pause before luring him. It took longer than it would have taken a dog, but he eventually had that “Aha moment” and did it himself. Now, he needs to stay in the spot for longer and longer periods to get treats. 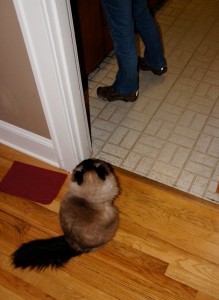 He had a history of being brushed and liking it in the past (you have to brush a Himalayan!) but when he came to us he didn’t tolerate it much. Mostly he wanted to play and bite the brush, and forget about brushing anything but his cheeks and back. So, we started with what he would tolerate, and just when he was doing a nice job, we’d stop and get a treat. Of course over time he’d tolerate a bit more and a bit more. I’d try to reward it when he did a slightly better job than usual, and if I pushed it too long and he got cranky/silly about it, I just stopped and left.
Each time he rolled over on his back (even when he wasn’t being brushed) I’d use the word “belly” while I talked to him, and if he let me touch and later rub the belly (without snapping the bear trap shut – our name for the attack we’d often get if we touched it) I’d give him a treat. We’ve gotten pretty far and I was impressed when he started making the connection for giving up the belly when I asked for it:

Any pet can learn to tolerate and eventually enjoy things they don’t like using this same process. Nail trims, handling body parts they don’t like touched, and being brushed are just three practical examples. You have to start with something they do tolerate or even enjoy, even if that means that you have to start with something that hardly looks like the behavior you want to achieve. Building up slowly is the key – even the tiniest progress is worth rewarding, and never ever forcing something they’re uncomfortable with.Â  Here’s another post about this process. It’s worth working on! If you ever want to talk to me (Christine) in more detail about your specific challenge, please do come in and I’ll try to help you with some tips

2 Responses to “Training a Cat”