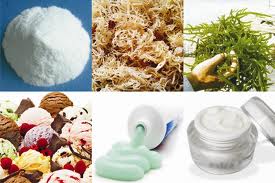 At Green Dog, we have some rules about what food we do and don’t carry. However, sometimes there are ingredients that we learn about along the way, and when we do more research, the time comes to evaluate whether we want to keep the products that contain it. We never want to take away a popular item, but we want every food we carry to promote the health of the animals that eat it, not to undermine it. Some stores might just drop a line of products that they don’t care for, but it’s always been our policy to try hard to present the case to the company that makes the product first, to see if they might be willing to consider our request to remove the ingredient in question.Dropping the line protects our customers, but convincing a company to change the ingredient helps to protect all pets that might be feeding it nationwide, and allows us to keep a food item in stock for our customers.

Carrageenan (a thickener made from red seaweed that is used in many canned pet foods and in some moist and chewy treats) is one of those ingredients. It’s an ingredient that might or might not cause obvious problems for animals right away, but it could have negative effects over time, especially if the animal is eating it every meal of every day. It’s also in a lot of human foods, so if you or someone you know has chronic GI problems, read on. Unfortunately, carrageenan is in several brands we carry, including in one of our most popular brands of canned cat foods. (Note: we did remove all foods containing carrageenan from our shelves shortly after this article was written).  Cats are tricky sometimes, and they want what they want – we’d rather keep the brand for them if we can. When we ask companies that use this thickener about it, they always respond that the carrageenan that they use is “food grade” which is safe, as opposed to “degraded” carrageenan which is not. However, we had read other opinions about that, and some interesting research studies to back them up. So, at the end of May we wrote to the 3 companies that we carry that use it, and to one company that we don’t carry yet, but were considering. Here’s the general letter, which we adapted to each company. This letter contains the disturbing things we found in our research into whether or not carrageenan can be dangerous or detrimental to those that consume it regularly.  Note: this particular company makes an organic line of pet food:

Hello – I’m writing today to ask about the use of carrageenan in your organic canned foods. Though I realize that the carrageenan used is “food grade” and not “degraded”, there are quite a few people advocating for a closer look into whether food grade carrageenan is in fact causing similar worrisome health effects to degraded carrageenan and whether it should indeed be used in human and animal foods at all.

The Cornucopia Institute issued a useful report in March of 2013 attempting to provide a comprehensive discussion of why so many are advocating for a change on the use of food grade Carrageenan. I’ve attached it in case you haven’t seen it. (http://www.cornucopia.org/wp-content/uploads/2013/02/Carrageenan-Report1.pdf)

For us, these are the things that stand out in that report and on other sites discussing the use of food grade carrageenan (some citations from studies are available in the PDF):

If all samples tested in the study contained degraded carrageenan above approved levels, then we might make a reasonable assumption that every canned food containing carrageenan does have some amount of this inflammatory and carcinogenic ingredient. Most owners stick to the same brand for every meal of every day, potentially for years at a time. To us, this seems like it carries a risk of accumulated affects in an animal’s smaller body.

Second, some studies show some of the same negative effects of food grade carrageenan as degraded carrageenan in the GI tract, as it pertains to inflammation. In 2011, researchers at the Harvard School of Public Health wrote: “[Studies] suggest that both native [i.e. un-degraded] and degraded carrageenan may have a pronounced effect on the exertion of an inflammatory pressure on colonic mucosal cells including colonic epithelial cells and monocytes/macrophages.”(citation in PDF). In “Review of harmful gastrointestinal effects of carrageenan in animal experiments” By J. K. Tobacman from the College of Medicine, University of Iowa, it is stated “Review of these data demonstrated that exposure to un-degraded as well as to degraded carrageenan was associated with the occurrence of intestinal ulcerations and neoplasms.” Cornucopia Society states, “For humans who consume carrageenan on a regular or daily basis, the inflammation will be prolonged and constant, which is a serious health concern since prolonged inflammation is a precursor to more serious disease. In fact, the medical community has long recognized that inflammation is associated with over 100 human diseases, including inflammatory bowel disease, rheumatoid arthritis, and arteriosclerosis. Inflammation is also linked to cancer”.

Third, though anecdotal in nature, there are many indications that this ingredient (food grade Carrageenan) is still causing inflammation. Many individuals experiencing gastrointestinal symptoms (ranging from mild belly bloat, to irritable bowel syndrome, to severe inflammatory bowel disease) have noticed that eliminating carrageenan from the diet leads to profound improvements in their gastrointestinal health. We at Green Dog have also seen a number of incidences, especially in cats, where animals with chronic vomiting or intestinal troubles switch off of canned foods with carrageenan onto a brand without carrageenan and seen their troubles clear up.  This seems to indicate to us that this low grade inflammation is in fact present and reversible with the removal of this ingredient.

Very important and relevant to the use of carrageenan in organic foods like yours, in early May 2013, the National Organic Standards Board voted to ban the use of Carrageenan in infant formulas and all other organic foods, though it appears that the USDA may be disregarding this recommendation (I believe that the ruling is still open for public comment for a few days). The National Organic Standards Board (NOSB) is the citizen panel charged by Congress to determine which synthetics are allowed in organic food production. (By law, the USDA cannot allow a synthetic material in organics unless it has been approved by the NOSB, so this is a confusing ruling by the USDA). Read more here about this: http://www.organicconsumers.org/articles/article_27542.cfm

Lastly, we think that the industry trend seems to really be headed towards more carrageenan-free canned foods. Whether this is in response to these sorts of studies, or simply in response to public perception and pressure, it is happening. Sales reps from a number of companies are leading with the fact that their cans are carrageenan-free when they are introducing can lines to us. I worry that your company might be falling behind this trend, when they could be leading the industry in the removal of this controversial ingredient, in accordance with the recommendations of the Organic Consumers Association and the National Organics Standards Board.  We hope you might consider a different thickener that doesn’t come with the controversies surrounding this ingredient.

The Results: The great news is that this company agreed with us and has made the decision to remove the Carrageenan from their canned foods ASAP – they are in the process of reformulating. The product we mentioned that we were looking at but don’t yet carry also agreed that it would be advisable to remove it from their products, starting almost immediately, but that the label would still reflect the old formulation until they ran out of labels. (pet food companies have 6 months I believe to change labeling when they change a formulation). The big company I mentioned had a fairly good response for such a big company, in that when they received our letter they actually stopped production of a new line of canned foods and reformulated them to be carrageenan free. They are in discussion about what to do with their older lines of pate style canned foods though, as the removal of the carrageenan can affect the mouth-feel of the food, so palatability might be affected. They’re in discussions internally as to how to reformulate. We are eager for them to do this but realize that it might not happen, or may take some time, but we want to support the steps they’ve taken so far to address the issue. However, this is problematic for us, as we sell so much of it, so we may make a shorter version of this letter to give customers who feed it, to see what their response will be – asking them outright whether we should discontinue the product, or at least let them choose whether to continue feeding it. (Note: this company was Wellness Pet Food, and they chose not to take carrageenan out of all of their cans. We discontinued the line.) The last company we mentioned never responded, which is typical of their lack of communications in the past over similar questions. We therefore discontinued that cat can line and will do the same with the dog food line, after breaking the news to our customers.

So what do you think? Would you continue to feed a food that contained carrageenan? If you shop with us, do you think we should pull all cans that contain it even if it’s your favorite?

We encourage you to look at your canned food or chewy treat to see if it contains carrageenan, and contact the company to let them know you wish they would discontinue the use of this ingredient.