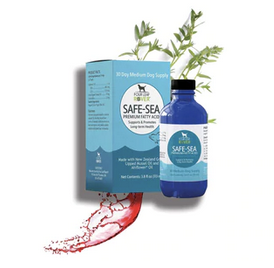 Fish oils are of course very helpful for skin and itch issues, as well as being very supportive to brain and eye health, and they’re good at helping to fight inflammation.
We do try to stock the most sustainable brands we can find, but the truth is that removing great quantities of fish and krill from the ocean leads to declining populations of larger sea animals and whales because they’re robbed of their food source. Big fish are also easily contaminated with mercury, PCBs and dioxins.
Safe-Sea’s Green Lipped Mussels from Four Leaf Rover are so sustainable! Grown in clean water in New Zealand, mussels grow along ropes where they soak up phytoplankton from the water. Phytoplankton grows from sunlight, so their mussels don’t have to compete for their food source with marine life. As a bonus, by controlling phytoplankton it in turn manages algae blooms.
While most fish oils only contain two fatty acids, Green Lipped Mussel Oil contains 30! According to a study published in “Inflammopharmacology” in 1997, the phospholipids in mussel oil make it 158 times more effective than fish oil. Green Lipped Mussels are one of the only generous sources of an important anti-inflammatory omega-3 called ETA, which can help regenerate cartilage in a dog with arthritis.
They pair it with Ahi Flower, which is a powerful plant, rich in omega fatty acids. One of those is omega-6 fatty acid called GLA which helps reduce inflammation and promotes good skin health. Ahiflower produces a precursor for EPA, which is an anti-inflammatory omega-3 in fish oil that also helps with hormone balance and supports your dog’s coat and skin. Astaxanthin, a powerful antioxidant, gives it its beautiful ruby red color.

The blend of Green Lipped Mussel Oil and Ahiflower create a super source of omega fatty acids making this a high quality oil for dogs.  (Note: Cats should not consume Ahiflower)

We always like to remind folks when starting any new supplement, to introduce it in small amounts, slowly building to the recommended dose.
What Are Green Pet Supplies?
Like us on Facebook!