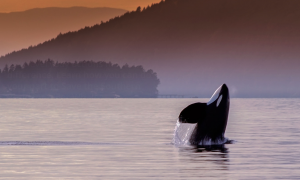 Happy Earth Day!
We had an amazing turnout for Raffle Tickets, raising $1302 for the Orca Conservancy. If you missed the raffle, we’re here to tell you that there are certainly other ways you can help! First, learn more about orcas:

If you were designing a t-shirt using artwork representing iconic symbols of the Pacific NW, you might choose an evergreen tree, Mt. Hood, perhaps a beer stein, and almost certainly an orca and a salmon. All of these things (minus the beer) are in need of protection, but none more than our orcas and our salmon. Did you know orcas are not actually whales, but are in fact the largest species of dolphin? They are are the most widely distributed mammals in the world (aside from us and maybe rats) living in every ocean around the world in every sort of climate. Orcas are apex predators, at the top of the food chain. No animals hunt orcas (except for humans).

They are remarkably intelligent, and live in groups called pods, each pod with their own unique culture and vocalizations. Each pod is genetically and behaviorally distinct from other killer whales. Though orcas have the ability to eat a variety of animals, pods all over the world have each specialized on specific prey species. Some eat mammals like sea lions, some even focus on whales larger than themselves (the nickname “killer whale” actually is a derivation of their original nickname, “whale killer”). Some, like our “Southern resident” orcas have specialized on salmon.
Defenders of Wildlife says, “Due to declines of their primary prey, the endangered chinook salmon, the southern resident population has been decreasing for years. Large dams, like those on the Snake River, and the destruction of salmon habitat have caused salmon stocks throughout the Northwest to either plummet or vanish, leaving orcas with less and less to eat. Today, these orcas are slowly starving to death. We all had our hearts broken a few years ago when a mother orca (Tahlequah) lost her baby due to malnourishment and she carried her body with her for 17 days. On a collision course with extinction, southern residents are also dealing with noise from ship traffic and toxic pollution. Underwater noise from boats disrupt the orcas’ echolocation and pollution from old vessels and stormwater runoff contaminate the salmon that the orcas eat. As the whales eat these polluted salmon, they accumulate toxic chemicals in their bodies, which can make them sick.”
You can help!! 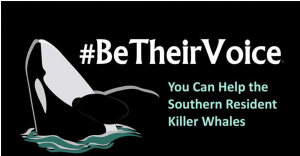 Advocate for the removal of the Snake River Dams to help restore this critical salmon population:

Chinook salmon are the largest of the PNW salmon, measuring up to five feet with some weighing more than 100 pounds. In their 3-6 year lifespan, some populations if Chinook remain in rivers, and some have an ocean phase where they spend an average of 4 – 5 years,  eventually returning to rivers to spawn.
Salmon are an iconic species of the Salish Sea. They play a critical role in supporting and maintaining ecological health, and are a part of the social fabric of First Nations and tribal culture. Salmon fishing has a $100 million economic impact annually.  Only 22 of at least 37 historic Chinook populations remain in this ecosystem. The remaining Chinook salmon are only 10% of their historic numbers, with some populations as low as 1% of their historic peak. Large dams, like those on the Snake River,have caused salmon stocks throughout the Northwest to either plummet or vanish, making Chinook  the least abundant of all of our North American salmon. Many populations are threatened or endangered. The Orca Conservancy says, “About 70 to 80 percent of juvenile salmon mortality occurs within 1 mile of a dam. Removing the Lower Snake River dams could result in an additional 15 million juvenile Chinook reaching the sea. The restoration of the lost salmon habitat and return of both salmon and steelhead to the Snake River would also fulfill treaty obligations related to tribal fishing rights in the Columbia Basin that have been ignored for decades”. Contact your Representatives and tell them to support this plan.

Watch out for plastic: 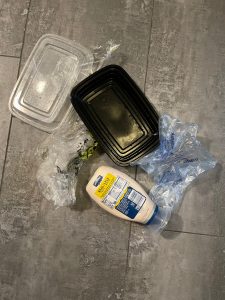 – Try to cut your use of plastics.
– Recycle plastics that are actually recyclable (Don’t put plastics in the bin that aren’t approved or it could result in big loads of recyclables being thrown away due to contamination).
– Dispose of plastics responsibly so they don’t wind up in the streams and rivers which then bring plastic to the ocean.
When boating, stay away from marine mammals – give them space.
Be mindful of the seafood you buy:
It’s important to buy good seafood from the right sources that are practicing good sustainable methods in the ways they gather their seafood from the ocean. Overfishing is a huge problem not only for the Southern Resident killer whales, but it depletes the nurseries which are vital to sustain the genetic diversity of our wild fish populations. By supporting sustainable seafood brands and taking a few moments to research what you’re eating and providing for your family you are in a better position to purchase sustainable brands before you hit the market.
Make a Rain Garden (great project for kids too!):
Rain gardens are bowl-shaped gardens that that collect and absorb storm water, allowing the soil to naturally filter pollutants out of rainfall. Furthermore, rain gardens play an important role in storm water attenuation by pooling rain during times of heavy flow to reduce the volume of runoff reaching waterways. Storm water attenuation can lessen local flooding issues as well as protect salmon habitat in creeks, rivers, and streams from erosion. By installing more rain gardens, we can help to clean stormwater and protect critical salmon habitat, thereby protecting our Southern Resident orcas.  This page for Tacoma students has a great explanation and educational graphic that illustrates how this simple system works.
Here’s another (from this link):

Support the work of good non profit organizations that are working hard to advocate for Orca and Salmon conservation:

The Orca Conservancy
Northwest Salmon Research
Wild Fish Conservancy
WildOrca.org
What Are Green Pet Supplies?
Like us on Facebook!