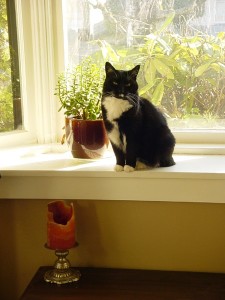 I only include this as a point of interest – I don’t mean to spread info that might make people feel unduly frightened of something that is of very low risk or occurrence so far, but it is worth mentioning. Certainly, avoiding communicable respiratory diseases are another thing to add to the long list of benefits to keeping cats inside. Also, if you are sick with swine flu, it’s worth keeping an eye out for symptoms in your pets.

The AVMA issued this statement:

November 4, 2009 — A 13-year old cat in Iowa developed signs of a respiratory infection after several people in the household were ill. Preliminary testing was positive for 2009 H1N1 on October 29, and the results were confirmed on November 2. This is the first report of a cat infected with H1N1. The cat has recovered from its illness.

The American Veterinary Medical Association and American Association of Feline Practitioners are reminding pet owners that many viruses can pass between people and animals, so this was not an altogether unexpected event. We are advising pet owners to monitor their pets’ health very closely, no matter what type of animal, and visit a veterinarian if there are any signs of illness.