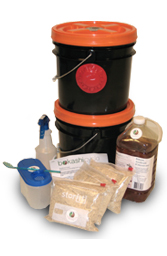 We are very excited to introduce you to this product. The disposal of pet waste is one of the most difficult issues surrounding pet ownership, in an environmental sense. Up until now, there has been no good way.Â  Leaving waste on the ground of course isn’t acceptable – not only is it rude and gross, it rinses away with our plentiful rains straight into the street drains which empty ultimately into our rivers and streams.Poop in a landfill releases methane, and “biodegradable” plastic bags release their own methane when they break down anaerobically in the landfill, only adding to the problem. Compostable bags may not release methane, but the poop remains a methane producer.Â  We thought flushing the poop was a good idea for a while, but we realized that some pathogens, like toxplasmosis, are not killed by the treatment process and can remain in our water supply. (This has been an even bigger problem in California, where sea otters have been having a recent problem with toxoplasmosis, and they suspect the link lies in flushed cat poop). Finally, some have invested in an in-ground waste disposal device that claims to compost the poop, but this method doesn’t hold up on closer inspection – it is very debatable whether the enzymes have a chance to break down the poop quickly enough for it to be free of pathogens by the time it soaks into the soil. The system recommends a large amount of water which flushes the waste into the soil before the enzymes have a chance to work, and the location of the device never changes, guaranteeing that the natural microorganisms in the soil in that location are depleted of their power to help in this process. Pathogens such as salmonella, E. coli and toxoplasmosis can easily contaminate our water in this way.

Enter Bokashicycle! This is a system that uses closed containers and natural enzymes to ferment the waste, killing all pathogens and making it perfectly safe to bury in the soil, making your garden lush! No smell, no flies, and very easy. They also make a kitchen scrap Bokashicycler (we’re using one in the Green Dog kitchen now), and if you’d like it, just let us know and we’ll get it for you. We can also drop ship either of these to anywhere in the country – what a great Christmas present!