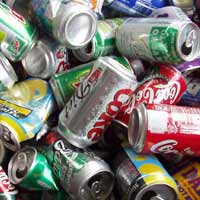 I just took a flight out to the east coast to visit friends and my folks. I was fairly shocked to realize that none of the 3 airlines I was on recycled their aluminum cans. It may seem like a little thing to worry about, but according to the Bureau of Transportation Statistics, about 780 million people took a flight in 2007. In looking around the plane, it seemed that about 75% of passengers used an aluminum can. When they come around to collect trash, it would be super easy to have two bags instead of one. The end result would be the same volume of refuse, but the can bags could be easily sent to recycling. The key to this equation, I believe, is that the airlines could be making money from this practice. I know that there are plenty of recycling companies that buy aluminum in large quantities, and will even pick them up. In these days of collapsing airlines due to financial constraints, wouldn’t it just make sense to be looking for ways to stretch their dollar? Couldn’t they also be using this practice as a PR move, showing us they’re getting in on the Green movement?

So, during this Earth Day week, perhaps we can get involved in a little green activism by writing to a few of the airlines and telling them they should come out of the dark ages and get with the program. Recycling aluminum cans seems basic, easy and money-making. Let them know!!

Aluminum can be recycled an infinite number of times

The energy you save by recycling one aluminum can could power your TV for 3 hours.

40 aluminum cans equals the amount of energy of 1 gallon of gas.

The energy saved by recycling one ton of aluminum is equal to about the amount of electricity your house uses in 10 years.

If each consumer recycled on more aluminum can per week this would equal about 15 billion cans.

One Response to “Perhaps a Little Activism on Earth Day??”