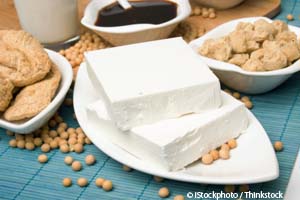 This article sums up nicely why I gave up unfermented soy years ago for my own diet, and why we have never allowed soy to be a primary ingredient in any of our foods or treats at Green Dog (we are aware it sneaks in in ingredients like lecithin, but we do what we can). We were upset to hear that Castor and Pollux was planning to use soy as one of their primary proteins in their new grain free formula (which is now on the market) and this just added to our list of why we had to get rid of that brand right away. I’ve always meant to write a blog posting about soy in pet foods, but Dr. Becker has come through again with a great article.

As I was scanning an industry trade journal recently, a headline caught my eye.

It announced the opening of a new manufacturing plant to produce protein for animal diets.

Protein in animal diets being one of my favorite subjects, I read a little further â€¦ only to discover the company opening the new plant makes vegetable protein.

And the reason they need more manufacturing capacity is to answer the growing demand for soy protein products in North America.

Clearly, soy in all its forms is being included in an increasing number of commercial dog and cat food formulas.

But I think it’s probably time for a closer look at what soy is, the health problems it can create, why it’s used by so many pet food manufacturers â€¦ and why you shouldn’t feed it to your dog or cat.

Parrots in New Zealand: Canaries in the Coal Mine*

In 1991, a wealthy American lawyer named Richard James was living with his wife in New Zealand.

The James’s were pursuing their retirement dream of raising exotic birds ‘down under.’

The couple wanted to feed their flock of exotics the best diet available.

Soya beans were being heavily marketed in the U.S. as a new wonder food, so James offered the young birds soya feed.

Parrots don’t eat soya beans in the wild. And the result for the James’ flock was disastrous.

James consulted Dr. Mike Fitzpatrick, a toxicologist consulting at a New Zealand laboratory. James told Fitzpatrick he was certain soya beans were killing his rare birds. Fitzpatrick thought James was mistaken, but he decided to investigate, because there was obviously hormonal disruption occurring with the parrots, and he had eliminated the possibility of other hormone disrupting chemicals like pesticides from the equation.

Dr. Fitzpatrick went about studying soya and its effects. He discovered soya contains both toxins and powerful plant estrogens capable of disrupting female menstrual cycles. It also appeared to damage the thyroid.

Eventually, the British government studied the safety of soya proteins in modern food and published results in 2002 concluding that health claims for soya were not supported by clear evidence. Further there could be risks associated with high levels of consumption.

*(For those of you unfamiliar with the expression “canaries in the coal mine,” from Wisegeek:

“Life for an actual canary in a coal mine could be described in three words: “short but meaningful.” Early coal mines did not feature ventilation systems, so miners would routinely bring a caged canary into new coal seams. Canaries are especially sensitive to methane and carbon monoxide, which made them ideal for detecting any dangerous gas build-ups. As long as the bird kept singing, the miners knew their air supply was safe. A dead canary signaled an immediate evacuation.”)

North American Cheetahs: More Canaries in the Coal Mine

Approximately 30 years ago, captive breeding of North American cheetahs was undertaken to reverse a population crisis within the species.

But in 1985, 29 cheetahs in American zoos died, many from liver disease. Only 18 were born, and 7 of those died before reaching adulthood.

As few as 10 percent of adult female cheetahs living in captivity in North America produced live cubs in the mid-1980s. Yet in other countries, 60 to 70 percent was the norm.

The difference? Cheetahs living and breeding successfully in other parts of the world were fed whole animal carcasses. North American cheetahs were fed a commercial feline diet of horsemeat and soy.

Researchers in Ohio studied the food the North American cheetahs were eating. They found the soy portion of the diet contained plant estrogens similar to the hormones found in female mammals.

Four cheetahs in a U.S. zoo were switched to a diet of chicken meat and no soy. Liver function improved, however, whether the cats would ever be able to breed successfully remained a question mark.

The researchers theorized the cheetahs were probably extra-sensitive to the effects of plant estrogens due to inbreeding (the result of a previous population crisis). However, the amount of soy in their diets was relatively small, leading the scientists to conclude all felines probably have difficulty ridding their bodies of excess estrogens.

The Difference Between “Safe” Soy and Most Soy

Only folks who’ve been living under a rock for the last 30 years have missed the massive marketing campaigns promoting the health benefits of soy products. It’s estimated the American soy industry spends at least $80 million a year to promote worldwide soy consumption.

This, despite well documented evidence of the anti-health properties of soya in both animals and humans.

Plant estrogens, also called phytoestrogens, produce biological effects in humans. In soy protein, the most common of these compounds are isoflavones.

The way soy is processed affects the level of phytoestrogens. Traditional fermentation reduces the levels of isoflavones dramatically, however, factory processing does not. And U.S. varieties of soy are manipulated to be pest resistant (soybeans have some of the highest concentrations of pesticides of any crop), with the result that they contain higher levels of isoflavones than soy grown in Japan or China.

Raw, mature soybeans contain not only phytoestrogens, but also phytates that prevent mineral absorption and substances that block the enzymes needed to digest protein. Soy also contains other anti-nutrients, including:

The soy in traditional oriental diets has been fermented for long periods (18 months on average) using molds, cultures or other substances that radically alter its biochemistry. This transformation through fermentation lessens the impact of anti-nutrients while making the amino acids in soybeans available for use by the body.

Factory processing, by contrast, starts with defatted soy protein meal rather than the whole bean. The meal is produced in a crushing process. Raw beans are crushed into thin flakes. The flakes are mixed with a petroleum-based hexane solvent to extract the soy oil. Flake waste is toasted and ground down to soy meal or soy flour, both of which wind up in animal feed.

The soy oil is then cleaned, bleached, degummed and deodorized.

“Naturally brewed” soy sauce means the processed soy protein meal has been mixed with mold spores and “aged” at high temperatures for 3 to 6 months.

Regular, non-brewed soy sauce takes only 2 days to produce. Soy flour is blended with hydrochloric acid at high temps, under pressure, and the result is hydrolyzed vegetable protein. Various preservatives and additives are used to improve color and taste. This method employs the use of the enzyme glutamase, which in turn produces large quantities of the “g” (glutamate) in MSG.

Why You Should Avoid Pet Foods Containing Soy Products

Soybeans and soybean-related products can be found in an increasing number of commercially available pet food formulas, dry, semi-moist and wet, including many beautifully advertised, big selling brands, as well as veterinary formulas and prescription diets.

Soy is a plant protein used by pet food companies to boost protein content and add bulk. Because plant proteins are less expensive than meat proteins, pet food manufacturers use them to increase profit margins.

The ingredient label might not even say soy, as it is commonly listed as vegetable broth, textured vegetable protein or TVP, and perhaps other aliases.

The majority of experts on pet nutrition agree soy isn’t good nutrition for cats or dogs. It is considered a low-quality, incomplete protein well known to create food allergies in pets.

According to Sally Fallon and Mary G. Enig, PhD, authors of Cinderella’s Dark Side:

“The soybean contains large quantities of natural toxins or “antinutrients.” First among them are potent enzyme inhibitors that block the action of trypsin and other enzymes needed for protein digestion. These inhibitors are large, tightly folded proteins that are not completely deactivated during ordinary cooking. They can produce serious gastric distress, reduced protein digestion and chronic deficiencies in amino acid uptake. In test animals, diets high in trypsin inhibitors cause enlargement and pathological conditions of the pancreas, including cancer. Soybeans also contain haemagglutinin, a clot-promoting substance that causes red blood cells to clump together. Trypsin inhibitors and haemagglutinin are growth inhibitors.”

A study was conducted in 2004 at the University of Pennsylvania to determine the amount of phytoestrogens in 24 random commercial dog foods. Results revealed all the foods containing soy ingredients had concentrations of phytoestrogens in large enough quantities to have a biological effect on the pet.i

Soy has been linked to gas and deadly bloat in dogs. It is high in purines and is therefore a completely inappropriate protein source for urate-forming dogs. It is also high in silicates and promotes the formation of silica stones.

The carbohydrate action of soy can cause a rise in blood sugar in many cats. Soy is also linked to thyroid damage, and since hyperthyroidism is common in kitties, this is yet another reason it should not be part of a feline’s diet.

The ingestion of soybean products is also linked to seizures in both dogs and cats.

I hope I’ve given you a more complete understanding of why avoiding pet foods containing soy products is best for your favorite four-legged companion.

In my opinion, the potential risks associated with feeding soy are simply unacceptable â€¦ especially when you consider your carnivorous cat or dog prefers and receives a much higher level of nutrition from animal protein sources.

Here’s another good article on soy in pet foods, from Dogs Naturally Magazine